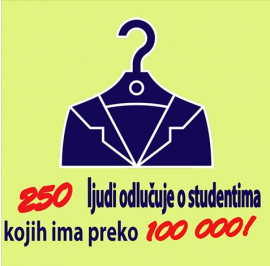 Serbia, February 2-5th – Over 200 college students took part in the poll „Let’s Tell Them What Bothers Us“ that was conducted by the „Studets on the Move“ team, within the „I Choose Whom I Choose“ inititive. The aim of the poll was to gather the information about the current problems among the college students population, and the results showed that most of the participants mentioned problems regarding finances.

„This poll conveyed the number of alarming problems; it gave us the energy to endure and helt the students. Response rate was high, students were content somebody wanted to hear their opinion,“ Stefan Rancčić, the team leader, shared his impressions with us.

The poll also showed there were thirty students interested in taking part in the further acitivites of the team, so one of the next steps will be the meeting with them. Besides that, the team will select five problems that appeared as most urgent and work on solving them in cooperation with the MPs.