Have You Heard of Dotmocracy? 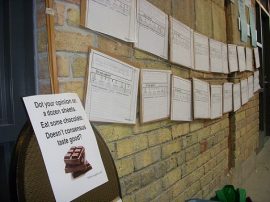 What is dotmocracy? It is a regulated decision making process that includes a large number of people with equal chances state their opinion.

How does the dotmocratic decision making process look like? Write down the idea you want to discuss on a sheet of paper. The voters state their opinion by coloring one dot on the “scale of agreement” below the statement they agree with the most. The scale of agreement consists of following statements: “Strong agreement”, “Agreement”, “Neutral”, “Disagreement”, “Strong disagreement” and “Confusion”. Voters leave their signature, which provides the insight into the sample that has voted. Only one idea per paper is discussed and each voter has the right to color only one dot per paper. Voters also have the opportunity to leave their comments regarding the idea they have voted for, which can improve the next decision making process and idea defining. 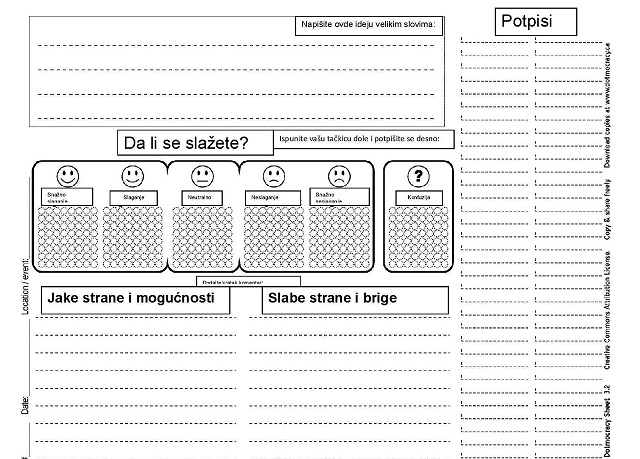 Why dotmocracy? Teams of the “I Choose Whom I Choose” initiative will use this method to decide about which problems they will talk to the MPs. During the numerous actions they have organized in various cities throughout Serbia, the activists have talked to their fellow citizens about the problems they perceived as the biggest in their local environment. After systematizing the problems mentioned, they will put the most frequent ones to dotmocratic voting. Unemployment, corruption, environment pollution, bureaucracy and bad roads are among the most common problems.

When and where will the citizens of Serbia have the opportunity to vote dotmocraticly? During the period from February 2nd to February 12th the activists of “I Chose Whom I Chose” initiative will organize the actions of dotmocratic voting in Bor, Zaječar, Kladovo, Velika Plana, Mali Zvornik, Novi Sad, Lazarevac and Belgrade. 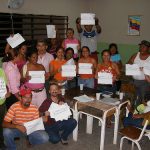 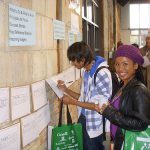 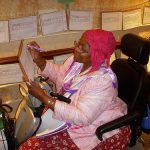 What happens after dotmocracy? After sorting out the most urgent problems by dotmocratic method, the activists will start founding the MPs offices – institutions without the address. This process includes inviting the MPs to visit the cities throughout Serbia, talk to the citizens about the chosen problems and make the commitment to talk about them during the Day of M Questions at the National Assembly. This way, “I Choose Whom I Choose” initiative tends to establish better cooperation and trust between the citizens and the MPs, but also to influence the MPs’ awareness of their accountability towards citizens.