Do You Take Care of Your Reproductive Health? 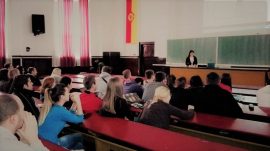 Bor, December 30th – Inspired by one of the 13 points, that we should value human life above all and take care of safety, Eastern Front, Serbia on the Move’s club from Bor, organized the lecture on reproductive health.

The lecturers Marko Jovanović and Monika Punđejević talked to the students of Technics Faculty in Bor and other interested visitors about the threats of sexually transmitted diseases and the importance of using adequate protection during sexual intercourse. Content of the lecture and the interest of the audience created serious and constructive atmosphere that enabled everybody to talk about the matter without holding back. Besides conversation, part of the education were video materials that presented different aspects of the threats that the young should be aware of, considering that reproductive health neglect is one of the most acute problems in Serbia. Videos also presented various forms of responsible behavior that were oriented towards prevention of these problems.

The students were satisfied with the conversation and the advice they were given, while the club makes plans for their following actions.