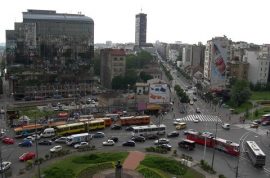 Belgrade, January 31st – February 5th – Stray dogs, poor waste management and city pollution, unlicensed construction, unresolved issues with parks and public spaces, lack of sewerage in the suburban areas, city traffic and holes in the roads are the problems most frequently mentioned by Belgrade citizens in the online poll “Coffee with the MP” that initiative’s “I Choose Whom I Choose” team from Belgrade conducted. The citizens of Belgrade will decide which of these topics is the most alarming during dotmocracy, which will take place on Saturday, February 11th, from 1 to 3pm, at the plateau in front of Belgrade City Library in Knez Mihailova Street.

Out of 104 participants in the poll 45 percent of them declared they were interested in meeting with the MPs for a coffee. Belgrade municipalities were unwilling to publish the poll on their web and social network pages.